Predictors of Failure after Fecal Microbiota Transplantation for the Therapy of Clostridium difficile Infection: A Multicenter Study

With our study, we aimed to answer a commonly asked question of our patients undergoing FMT and their referring physicians: “What is my likelihood of failing the first FMT and needing a second one?”

We attempted to identify clinical predictors of FMT failure and to come up with a risk score to answer this question and to help plan the FMT treatment.

It is well established that FMT has an 80 to 90 percent success rate in curing recurrent C. difficile infection (rCDI). Approximately 10 to 20 percent of patients fail a single FMT. The reasons these failures take place are not known. I run a large, high-volume FMT program here at Indiana University, as does Colleen Kelly at Brown. Patients’ data are prospectively entered into research databases and the patients are followed as long as possible.

We hypothesized that certain patient characteristics might be associated with higher likelihood of FMT success or failure such as age, inflammatory bowel disease, immunocompromised state, CDI history and characteristics such as number of previous episodes or severe disease at the time of FMT, as well as FMT variables such as enema versus colonoscopy delivery and fresh versus frozen stool. We took all potential variables/predictors and, between the two academic centers, we analyzed data from 328 patients.

We identified several independent predictors of early failure: severity of CDI (OR=5.95), need of inpatient FMT (OR=3.78), and number of CDI-associated hospital admissions (OR=1.43).

We then developed a risk score or a failure risk prediction model. Based upon the odds ratio of failure associated with a risk factor, we assigned five risk points to severe or severe-complicated CDI, four risk points to inpatient setting, and one point to each CDI-related hospitalization prior to FMT. The risk score for a patient is calculated by adding the points for each risk factor to indicate the risk for failure to resolve CDI with one FMT. For example, a patient with severe CDI and two CDI-related hospitalizations prior to FMT would have a risk score of seven points, if the FMT is performed in an outpatient setting.

To validate our prediction model created based on our patient cohort, we applied the point scoring system to Dina Kao’s (Edmonton, Canada) similarly large FMT patient cohort. The performance of the risk scoring system was evaluated by calculating the area under the receiver operating characteristic curve (AUROC) and comparing the failure rates for risk groups in the development and validations cohorts.

We found the point scoring system performed very well in in the original cohort from the United States and even slightly better in the validation cohort from Canada, with an AUROC for FMT failure of 0.81 and 0.84, respectively. (See figure below.) 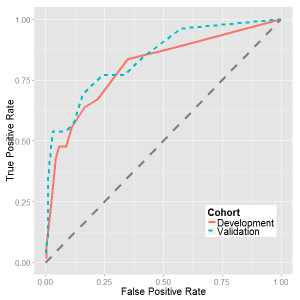 In summary, we found that a majority of FMTs fail within 1 month. Having severe or severe/complicated CDI at the time of FMT, being an inpatient at the time of FMT, and having a history of CDI-related hospitalizations increase the risk of FMT failure. Based upon the risk score, we can estimate the chance of failing a single FMT for each of our patients and plan accordingly on a single versus repeat FMTs. 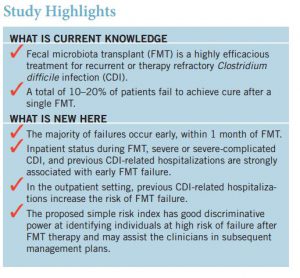